The "Meriden Green" is a 14-acre flood control/park and economic development project located in the heart of downtown Meriden, CT. The $14 million project is a key component of Meriden's downtown transformation, which includes an unprecedented amount of private, local, state, and federal investment in the areas of flood control infrastructure, brownfield remediation, transportation and housing.

Walking Map of the Meriden Green 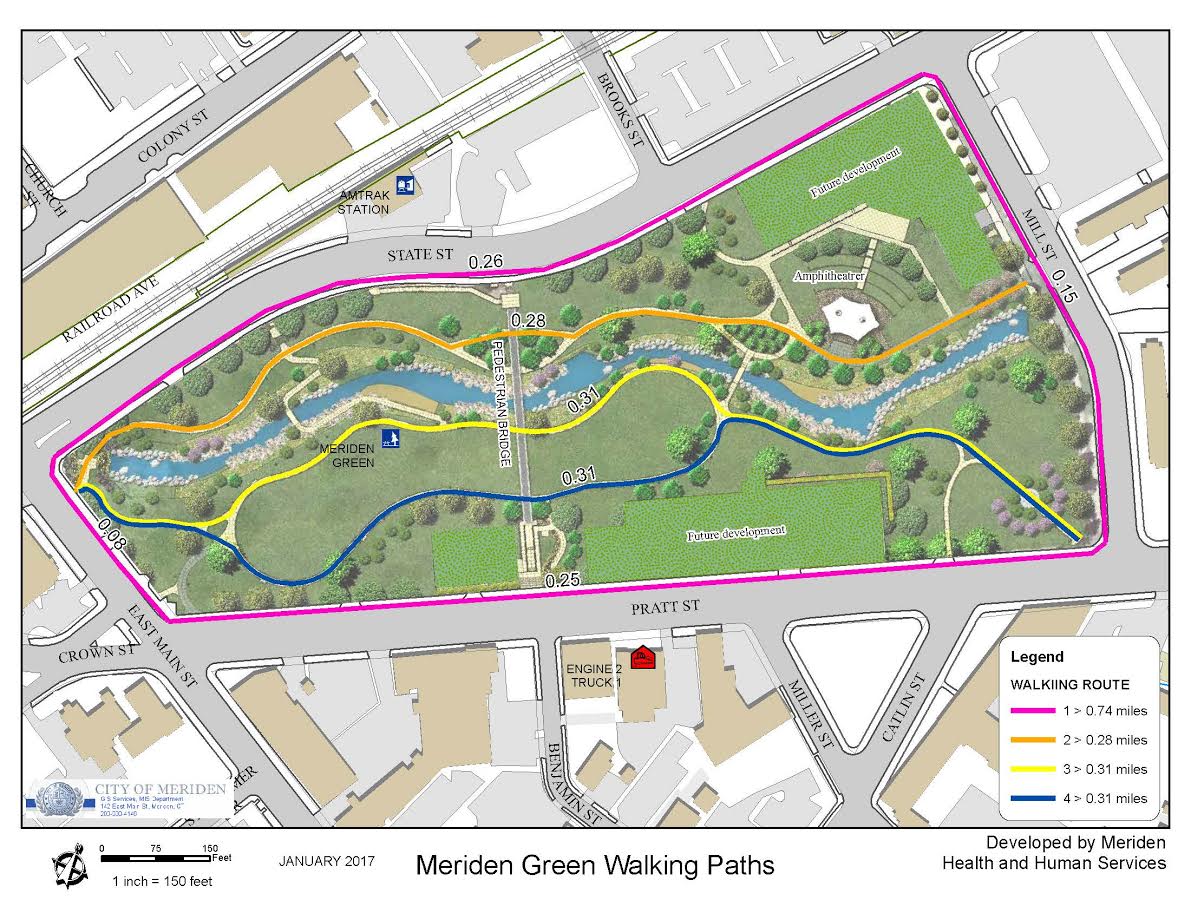 The Meriden Green is located at the former “Hub” site, a 14-acre remediated brownfield site located at 77 State Street in downtown Meriden. Once a center of industrial and commercial activity, the site became abandoned and environmentally contaminated over time. In 2007, the City competed for and was awarded $2.9 million in federal and state funds matched by local sources to assess the environmental damage at the site, to demolish the commercial buildings located there, clear the site for reuse, and to work with the community to develop a Site Reuse Plan.

Under the direction of the City Manager, the City of Meriden formed and coordinated a Hub Site Reuse Committee tasked with planning the reuse of the site. It was a considerable challenge given the fact that the site first and foremost needed to address the flooding problems associated with Harbor Brook. The design team, led by the City of Meriden and engineering firm Milone and MacBroom, offered an opportunity to create a vibrant, public open space in the center of the distressed downtown.

The Site Reuse Plan completed in 2007 recommended the implementation of several key components. First, the plans would daylight and restore Harbor Brook and construct a town green that serves as a flood storage area. The implementation of these measures will significantly reduce the risk of damage to properties in the downtown following significant rain events. Second, the site reuse plan created approximately three acres within the site, located outside of the 100-year floodplain, to be allocated for future economic development.

In 2012, the City of Meriden received permitting approval from the CT Department of Energy and Environmental Protection and the Army Corps of Engineers to implement the Hub Site Reuse Plan and the entire Harbor Brook Flood Control and Linear Trail Project, a comprehensive plan to alleviate flooding along 3.5 miles of Harbor Brook. Following the permitting approval, the City applied to the state and was awarded $12.9 million in state bond funds matched by over $1 million in local capital improvement bond funds to implement the project. An analysis of the project prepared by the CT DEEP states that the project will “result in positive benefits to public safety and property”, and that “many public safety, health, and economic benefits of Harbor Brook Master Plan Alternative will have a positive effect on minority and low income residents.” In June, 2016, the City completed the construction of the park and flood control project, on time and within the approved budget, using 100 percent small business contracting and over 25% women and minority owned business contracting services for site construction. The park is scheduled to be open to the public on September 9, 2016.

From “the Hub” to the “Meriden Green”

In 2015, the City of Meriden held a “name the park” contest to engage the public in the project and inform the public about all of the downtown Meriden development projects. Contest entries were collected through a “Name the Park” webpage found at www.meriden2020.com. The contest was promoted through print and digital advertising in the Record Journal, on the City website, Facebook page and Twitter site, and via various City Departments including the Meriden Senior Center. The contest yielded 750 entries and 450 unique park names. The City formally designated the former abandoned Hub site as the “Meriden Green” in 2016.

Future Development at the Meriden Green

In 2014, the City issued a Request for Qualifications and a Request for Proposals for the development at the site. The process resulted in the choice of Pennrose Properties and the Cloud Company, LLC as the preferred developer for the site. The designation, which was approved by the City Council on July 20, 2015, authorized the City Manager to negotiate a Master Development Agreement (MDA) with Pennrose Properties and the Cloud Company, LLC.

On June 6, 2016, the Meriden City Council adopted the Master Development Agreement which   outlines the terms and conditions of a two-phased, private development. The first phase consists of development at the corner of State Street and Mill Street, including ninety residential units, 80% of which are “market rate” and 20% of which shall be affordable housing units reserved for residents at or below 80% of the New Haven area median income; 8,400 square feet of rentable retail space; and approximately 3,500 square feet of rentable restaurant space with an estimated cost of $24 million.

Phase II involves the development of two parcels along Pratt Street including eighty residential units, 80% of which are “market rate” and 20% of which shall be affordable housing units reserved for residents at or below 80% of the New Haven area median income; 3,500 square feet of rentable retail space; 3,000 square feet of rentable restaurant space; and 1,600 square feet of rental pavilion/café retail space “envisioned as a sculptural building to serve as a signature visual element for the park”, with a portion of the building reserved for use by the City for park management and maintenance purposes, with a total project cost of $20.74 million. The MDA provides, among other terms, that there shall be a development plan and budget subject to City approval and that 20% of the value of all contracting services shall be sourced locally to companies or individuals within New Haven County.

Pennrose will acquire the development parcels from the City for $1.25 million. The “Meriden Green” will remain open during construction of the Pennrose development sites. Development is expected to commence in 2017 and be completed in 2020. The result is the transformation of a once abandoned former industrial site located in the center of the downtown into a City park that serves the dual purposes of providing public green space and flood storage downtown while freeing up new land for economic development. The project is a key piece of the redevelopment of downtown Meriden.

How Residents Can Enjoy the Park