Castle Craig Tower is a stone observation tower atop East Peak in Meriden.  The tower, which was dedicated on October 29, 1900, wa 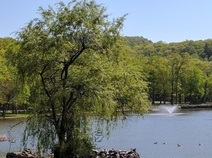 s given to the people of Meriden by Walter Hubbard, President of the Bradley & Hubbard Manufacturing Company, and one of the most generous of the city's philanthropic citizens.

The round stone observation tower of native trap rock was built by local stone masons in 1900.  It stands on East Peak with an elevation of 976 feet.  The tower is 32 feet in height and 58 feet in circumference.  An interior stairway provides access to the observation deck.  On a clear day, an observer may see the Sleeping Giant Mountain Range to the south, and catch a glimpse of New Haven, the glistening water of Long Island Sound, and even the dim profile of Long Island.  To the north, the foot hills of the Berkshires in Southern Massachusetts, vicinity of Mt. Tom, are discernible.

The inspiration for the tower’s design has been disputed for years.  Some say Walter Hubbard, a world traveler, was inspired by a Norman French Tower; others by a 12th Century Turkish Tower on the Danube; still others maintain that it was patterned upon an ancient fortification in Craigelachie, Scotland. 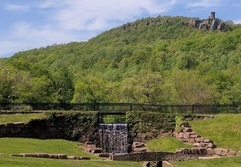 Hubbard Park - The tower is part of the present 1,800 acre park which was donated by Mr. Hubbard and bears his name.  Some 51 parcels of land, including 150 acres formerly known as the Hubbard Park State Park deeded by the State of Connecticut to the City, comprise the park.  The tract was laid out originally by Mr. Hubbard in consultation with the Olmsted Brothers, sons of Frederick Law Olmsted, America’s foremost landscape architect.  A great deal of effort has been taken to preserve and accentuate the historic nature of his park.  The skate house, as it is known today, was formerly a refreshment and lunch facility.

The James J. Barry Bandshell built in 1956 and named for Barry, a former Park Superintendent, is the site of numerous concerts and outdoor festivals; in 1990 Roberta Peters was a guest artist.

Although the State Highway construction in the mid 1960’s caused some severe damage to the water resources of the park, the Department of Parks and Recreation makes great efforts to mitigate the effects.  The highway separates the woodland from the recreation area which embraces Mirror Lake and offers skating in winter.  Tennis courts, the pavilion, and other amenities, including swings and playground equipment for younger children, are also included in the recreation area.  The area north of the highway provides hiking and outdoor education; the area to the south is actively maintained.

Castle Craig - 1,002 feet above sea level, the top of Castle Craig offers a spectacular view of the Greater Meriden area.  There are hiking trails to the Tower as well as a road which is open from May 1st through October 31st from 10:00 a.m. to 5:30 p.m. (weather permitting).

Dedication of Tower - On October 29,1900 dedicatory exercises were held at which Mr. Hubbard formally presented the Tower to the City of Meriden.   According to a paper, “a large number of members of the Court of Common Council, together with other dignitaries attended an oyster roast in the shadow of the Tower.  Westbound trolleys were crowded with citizens who used this form of transportation to bring them to the park area from where they had a long, arduous trek, on foot, to the Tower.

There were also a number of persons who drove to the top of the mountain in their own carriages.  At two o’clock, it was estimated that approximately 250 guests were in attendance.  Their genial host, Mr. Hubbard, had provided six barrels of clams.  These were roasted over a big fire under the direction of C.W.F. Pardee of the Winthrop Hotel and P.J. Quigley, a local contractor, with the assistance of twelve men.

“The Tower itself was the center of attraction and nearly everyone had something to say concerning the beautiful scenery and Mr. Hubbard’s benevolence.  During the afternoon, several group photographs were taken. Three cheers were given to Mr. Hubbard by the visitors.  They were called for by Judge Wilbur F. Davis, who acclaimed Mr. Hubbard as the “first citizen of Meriden”.

“A large flag was raised on the tower at noon by Contractor Quigley and as it floated to the breeze three rousing cheers were given.”

Geography/Geology -  East Peak/West Peak where the Castle is located is reportedly the highest mountain within 25 miles of the coastline from Cadillac Mountain in Maine to Florida.  The Hanging Hills of Meriden are part of the Metacomet Ridge that is nearly continuous from Northhampton, Massachusetts to Branford, Connecticut.  Geologically speaking in Connecticut, the ridge runs close to the west side of the Central Valley as far south as Meriden, then breaks up where it continues clear across the other side of the valley.

These areas, known as the Hanging Hills of Meriden on the west and Lamentation Mountain on the east, were formed by volcanoes 200 million years ago when dinosaurs still roamed the earth.  Two of three major lava flows covered the red sandstone valley in Meriden.  Each one cooled and hardened into trap rock known as step (basalt) and was gradually covered by sand and mud eroded from the surrounding hills.  Through time, these sediments were buried by new sediment and cemented into brownstone by the slow trickle of groundwater.  One exposure of the contact between the sandstone and basalt is in the cliff Northeast of Mirror Lake, 0.15 mile south of the Southern tip of Merimere Reservoir.  A two foot thick layer of sandstone covers light-brown to light-red-banded silt stone and lays on top of two (2) inches of red clay with overlying basalt.

Once the volcanic activity stopped, the whole region was fractured and tilted to the West.  Since then, hundreds of feet of the softer sandstone bedrock have eroded from the valley leaving the dense, hard volcanic trap rock ridge layers standing out far above the surrounding landscape.

A Legend   - It is only natural that the passing of years should develop legends concerning Castle Craig as it stands in solemn grandeur.  Perhaps the most unusual story concerns the fabled "Black Dog".  Rumor has it that the person who glimpses this animal roaming the mountain’s upper reaches, will see it three times.  His first view will result in an increase of worldly goods. The second time the Black Dog is seen, the visitor will begin to suffer physical ailments and, of course, the inevitable:  the third view will result in the death of the beholder.

Recent History - Since 1930, the Meriden YMCA has sponsored an Annual Easter Sunrise observance at the Tower site.  Hundreds make the trip via automobiles, motorcycles, horseback and on foot for this religious celebration in its beautiful scenic location.  The City of Meriden takes special care in the maintenance of the road leading to Castle Craig.

On April 22,1986, a rededication of Castle Craig was held to commemorate the work to rehabilitate the Castle after years of neglect.  In 1987, a 90 ft. flag pole was erected thanks to the generosity and support of the Meriden Lions Club.  In 1991, a group known as the "Light the Flag Committee" lit the flag and Castle for Meriden, surrounding towns, and visitors to enjoy.