Meriden native Roberto Rosado began his career as a Police Officer in Willimantic, Connecticut in January of 1998. After commencing his career as a Patrol Officer, Rosado was assigned to community policing and was later promoted to Detective where he served the Detective Bureau for six years.

As Detective, Rosado was instrumental with investigating major crimes and assisted in several high profile investigations with the FBI, DEA, ATF and State Police Major Crimes. Rosado was promoted to Patrol Sergeant and worked as a first line supervisor on a Patrol Shift and was influential in molding the young officers who are presently supervisors.

After his role as Patrol Sergeant, Rosado returned to his investigative roots as Detective Lieutenant responsible for the Detective Bureau, Detectives and all felony crime. In August of 2016, Rosado was selected as Chief of Police for the Willimantic Police Department. As Chief, Rosado was able to achieve organizational excellence, crime reduction, improvement on the solvability rate, and develop accredited community policing programs. Under his leadership, the department and the town of Willimantic received awards and recognition for both community policing efforts and reducing crime statistics.

Chief Rosado completed his Associate’s Degree in General Studies from Naugatuck Valley Community College, his Bachelor’s Degree in Sociology with a minor in criminology from Eastern Connecticut State University and his Master’s Degree in Criminal Justice with a focus in Management from the University of New Haven. In 2015, Rosado graduated from the F.B.I. National Academy and has obtained numerous awards and accolades for his investigations in cases and several State Citations. 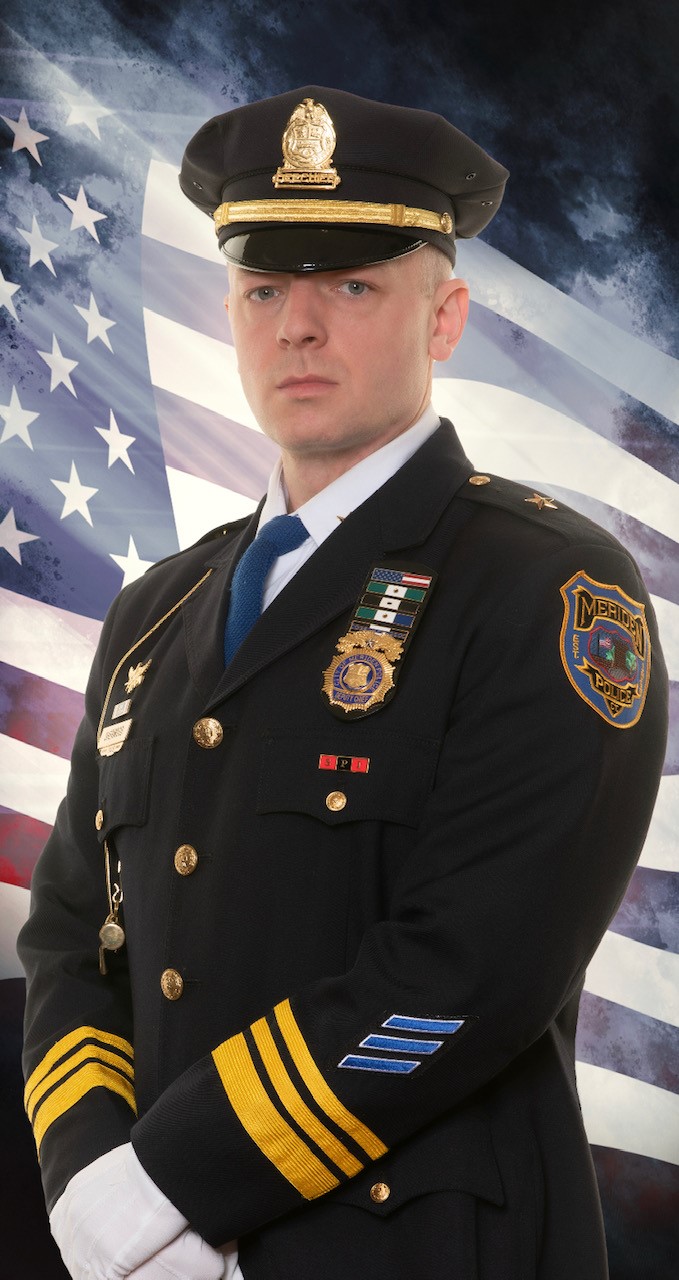 In August 2006, Deputy Chief Sherwood transferred to the Meriden Police Department where he has served the agency in a number of capacities, including but not limited to, Patrol Officer, Field Training Officer, Police Instructor (in numerous different specialties), a SWAT Team Operator, Patrol Supervisor, Professional Development Unit Supervisor, Community Police Unit Commander, the Support Services Division Commander, and currently serves as the Deputy Chief of Police of all Administrative Services for the agency.

Deputy Chief Sherwood holds an Associate’s Degree in Criminal Justice from Middlesex Community College, and a Bachelor’s Degree in Management from Post University with a focus in Leadership.  He is actively pursuing a Master's Degree in Public Administration from Albertus Magnus College.  In 2017, Deputy Chief Sherwood successfully completed the Southern Police Institute’s 79th Command Officers Development Course (CODC), a specialized course focused on teaching communication skills, management techniques, and leadership philosophies.  In May 2020, Deputy Chief Sherwood graduated from the Southern Police Institute’s 143rd Administrative Officers Course (AOC), a Police Executive Leadership Graduate Program where he served as the class president.  Deputy Chief Sherwood is a proud veteran of the United States Air Force and the Connecticut Air National Guard, having served as a Security Forces specialist and non-commissioned officer.

Deputy Chief, Jeremiah “Jerry” Scully began his law enforcement career in 1988 as a part time police officer with the Thomaston (CT) Police Dept. In 1990 he went to work for the Torrington (CT) Police Dept. In 1991, Deputy Chief Scully transferred to the Naugatuck (CT) Police Department where he was assigned to the Patrol Division as a patrol officer. In Naugatuck, he held the ranks of Field Training Officer, Patrol Sergeant, Patrol Lieutenant and retired in 2012 with the rank of Captain. As Captain, he assumed command of the agency in the absence of the Chief. He managed the Patrol Division, Communications Center, Animal Control, and Crossing Guard Program. As Accreditation Manager, he updated their policy and procedure manual and successfully led efforts to attain Tier III Accreditation from the State of Connecticut Police Officer Standards and Training Council.

In 2012, he retired from Naugatuck and accepted a position with the Meriden Police Department. He was assigned to the Patrol Division as a patrol officer and began serving as a member of the Honor Guard. In 2015, he was assigned to the Training Division as the department’s Training Officer. In 2016, he was placed in charge of this division. He developed and managed the unit’s annual budget, was responsible for maintaining police certification, NCIC certification and scheduling in-service and external training. He updated and managed the recruitment and retention portions of the hiring process. He was also the Field Training Coordinator responsible for administering the state-mandated program for new recruits.

Captain George DelMastro began his law enforcement career with the City of Meriden in July of 1997.  While in the patrol division, Captain DelMastro became a Field Training Officer and a crisis negotiator, later becomming a member of the crisis negotiation team.  During this time he obtained an Associates Degree in Criminal Justice and also became a member of the Meriden Police Department Honor Guard, as well as being assigned to the Crime Suppression Unit.

Captain DelMastro was promoted to Patrol Lieutenant where he was the shift commander of both the first and third-watches.  He was later assigned to the role of Lieutenant of the Neighborhood Initiative Unit wherein he oversaw the neighborhood initiative officers, SRO's and special events.  Captain DelMastro’s goal of community policing was to develop strong relationships within the community and to create a better relationship between the police department and the residents of the City of Meriden.  Captain DelMastro served as the Executive Officer prior to being promoted to Captain. 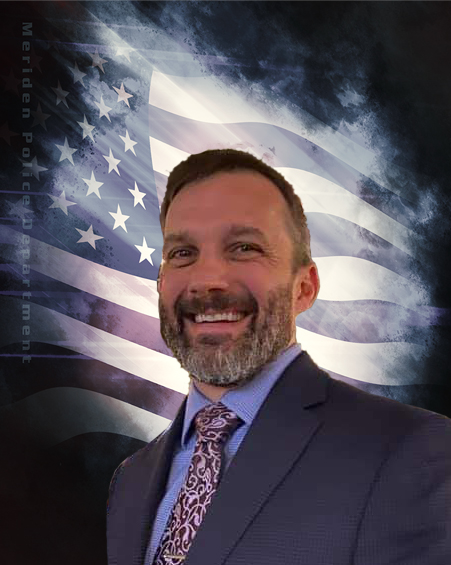 Detective Lieutenant George Clements began his policing career in December of 2004 when he joined the Meriden Police Department.  As a Patrol Officer, Clements served on the Honor Guard, the Accident Investigation Team, and as a Field Training Officer.

In 2009, Clements was promoted to the rank of Detective and has worked in the Major Crimes and Criminal Identification Units where he investigated major cases and received extensive training in the forensic sciences, crime scene and evidence processing, fingerprint examination, digital photography, video and image enhancement, and became the department’s first digital mobile forensic examiner.

In 2014, Clements was promoted to the rank of Detective Sergeant and has supervised the Criminal Identification and Special Crimes Units.  He improved investigative lead times through efficiency improvements, fostered relationships with local, state, and federal partners to aid in the investigations of child exploitation and human trafficking, functioned as the department liaison to the juvenile justice system, and served on the South Central Child Advocacy Center’s (SCCAC) Multi-Disciplinary Team (MDT) Executive Committee.

In 2021, Clements was promoted to the rank of Detective Lieutenant and given command of the newly established Special Services Division where he oversees the Records Unit, the Information Technology Unit, and the Mental Health Services Unit.  He functions as the Mental Health and Crisis Intervention Coordinator, maintaining relationships with community partners and local mental health providers, and is liaison to the MORR and MERR programs to divert people suffering from addiction and behavioral health disorders away from the criminal justice system and towards treatment and services.  Detective Lieutenant Clements also serves as the department’s Latent Fingerprint Unit Supervisor, IDEMIA Latent Workstation Administrator, and is a member of Grant Management and Accreditation Teams.

Detective Lieutenant Clements holds Bachelor of Arts Degree in Philosophy from the University of Connecticut, and Master of Science Degree in Organizational Management from Chadron State College, a program focused on leadership, communication, conflict resolution, research design, and program implementation. 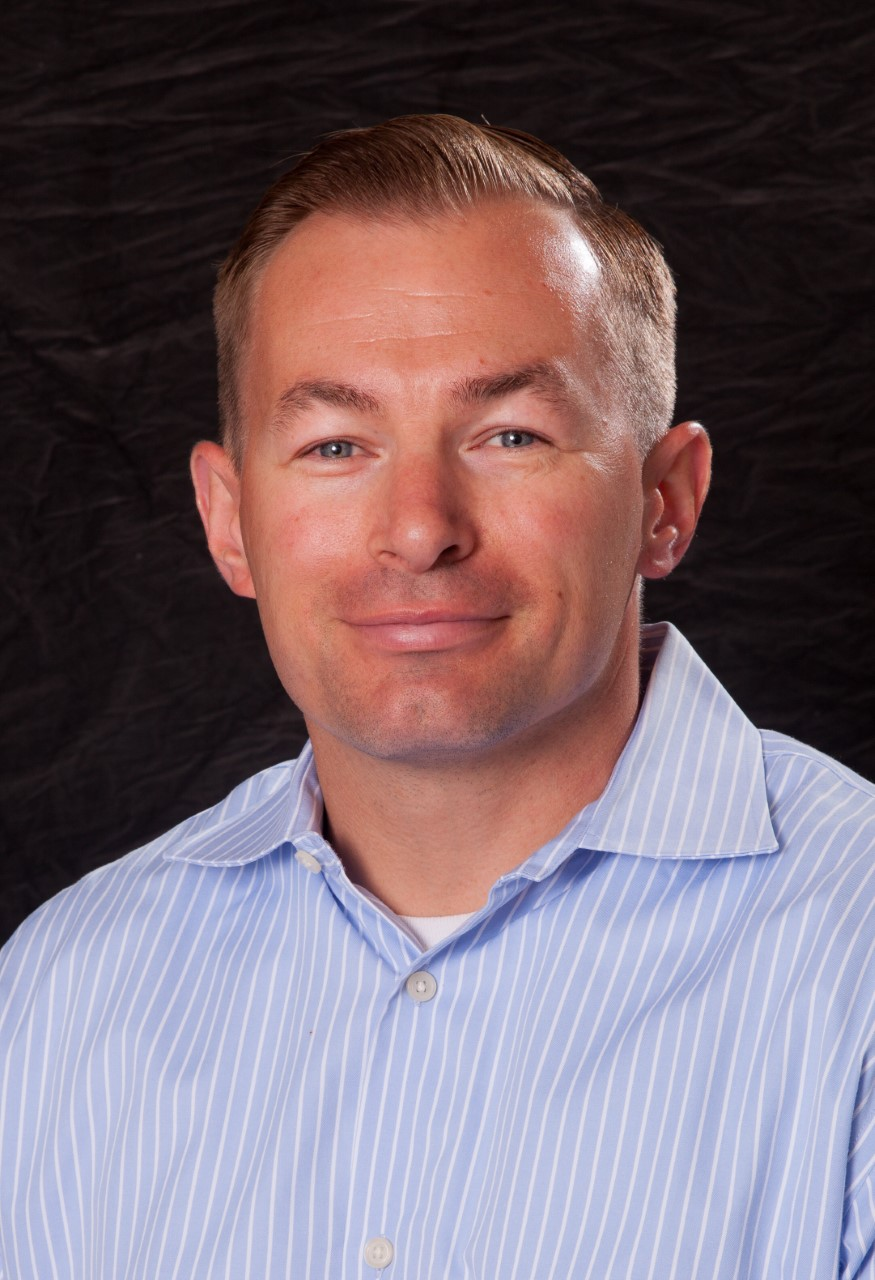