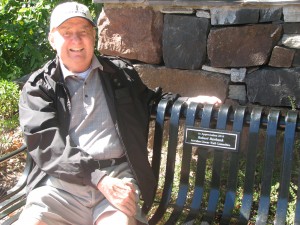 MERIDEN - A typical night for Bob Burbank used to include lots of activity, like umpiring two or three softball games. One night this past April he was umpiring and suddenly he didn't feel right. Burbank couldn't focus on the game, players were yelling at him, and he wasn't sure what was going on. The feeling wore off and then returned. In May, Burbank, who had already been diagnosed with prostate cancer, was told he was suffering from vertigo. Multiple trips to the emergency room later, Burbank was given a much different diagnosis: a brain tumor and terminal cancer.

"It's a terrible illness," Burbank said. "I'm not supposed to be sitting here right now."

But Burbank was able to sit on a bench that will bear his name after tonight's dedication ceremony at the Gorge Trail entrance of the Linear Trail, next to Red Bridge. The 5 p.m. dedication honors his service on the Meriden Linear Trail Advisory Committee for the past five years. "It's the best trail in the state," Burbank said. "A lot of people have used the trail for several years even though it wasn't finished. I think it will be an asset to the community." Committee Chairman Joseph Zajac said Burbank has been just as big an asset to the committee. "I ran into (Burbank) walking on the track at Platt High School years ago and he asked me ‘How's the trails going?' " Zajac said. "Every so often I'd run into him and he'd ask and I'd say ‘they're fine, be patient.'" After running into him enough and Burbank asking what he could do to help every time, Zajac finally told him to join the committee.

"Bob's a former high school teacher and he has a thirst for history," Zajac explained. "So he went and did a lot of the research for the information on the kiosks." Zajac said Burbank has been an asset to the committee, but Burbank is quick to put the spotlight on Zajac for his work in turning the area from dirt paths into paved trails.

Burbank's wife Beverly said she is proud of his work on the trail and his fight against cancer. "He was in the hospital for five weeks," she said. "The doctor's said he was their miracle." Burbank said he plans on winning the battle.

"This is extra innings," said Zajac, "for the game that should have been over in the ninth (inning)."

*Robert J. Burbank   MERIDEN - Robert "Papa" James Burbank Sr., 73, of Meriden, died on Saturday morning, Jan. 8, 2011, after his battle with brain cancer. He passed away at home surrounded by his loving family. He was the beloved husband of 50 years, to Beverly Cooper Burbank.

Born in Meriden, on June 28, 1937, he was the son of the late Raymond and Christine Burbank. Robert was a graduate of Meriden High School. After receiving his B.A. from Central Conn. State University, he continued his Masters 6th and 7th year at University of Hartford. He dedicated his career to teaching in the Meriden and Wallingford school systems for 37 years. He also taught the summer program at Choate Rosemary Hall for over 30 years. Robert held office of President for CCAFO Football in 1993, EAIFO College Football in 1998 and Greater New Haven Soccer Assoc. from 2000-2004. He also enjoyed his 46 years of officiating high school football, 39 years of college football, 25 years of high school soccer and over 20 years of high school and adult softball.

Robert was a parishioner of Holy Angels Church for 44 years. During these years he was a member of the Parish Council, a lector and religious education teacher. He was President of the Davis Brook Home Owners Assoc. in Wilmington, Vt., for 12 years. Robert was recently honored for all of his work on the Linear Trail. He was a tennis pro at the Farms Country Club and the Highlane Country Club. Robert enjoyed spending time with his family, especially in Vt., skiing, reading and singing.

The family would like to thank everyone that helped Robert during his illness, for their loving care, kindness and friendship that will never be forgotten.

Beside his wife, he is survived by his four children, Marie and her husband, Paul Turner, of Meriden, Michelle and her husband, Gary Preston, of Simsbury, Robert Jr. and his wife, Lisa Burbank, of Newtown and Stephan Burbank, of Meriden; his beloved grandchildren, Justin, Kyle, Joanna, Eric, Shannon and Alex; his siblings and their spouses, Donald and Anni Burbank, of Groton Long Point, Richard and Sheila Burbank, of Southington, Christine and John Doyle, of Barkhamsted; sisters-in-law, Judy Dufresne, of New Britain, Shari Tricarico, of Carmel, N.Y. and brother-in-law and wife, George and LuAnn Marx, of East Haddam, aunts and uncles, several nieces, nephews, cousins and friends. He was predeceased by his son, James Burbank and his sister, Janet Iwanicki.

Specific purpose for which the grant will be used.
As part of a long-term city wide network of linear trails, the Hanover Pond Linear Trail is being constructed with federal, state and local funds. This trail runs from the Quinnipiac River Linear Gorge Trail, at Meriden’s historic Red Bridge, ending at Platt High School.  The 1.2 mile, 10 feet wide paved trail has been designed to adhere to ADA (Americans with Disabilities Act) requirements for handicapped accessibility. Included in the planning are three (3) informational kiosks, but not supported by federal, state and local funds, located at trailside overlooks along the path, and one at the trails main entrance at Dossin Beach, on the shores of Hanover Pond. Each kiosk will contain historical content, informing the viewer of the history of the surrounding area around the turning of the 19th century, as well as the Cromwell to Waterbury Railroad, over which the trail has been constructed. That content has been researched by members of the Advisory Committee through the Meriden Public Library, the Meriden Record –Journal and the Meriden Historical Society, among others. Maps, photos, written history, some dating back 100 years have been converted to digital use and await the actual composition and imaging to material with a life expectancy of twenty (20) years.

On behalf of the Meriden Linear Trail Advisory Committee, thank you for considering our request.
Joseph Zajac
Chairman